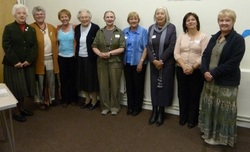 On Thursday 5th MAY the inaugural meeting of The Bishop’s Stortford WI took place at the Charis Centre, Water Lane, Bishops Stortford

Following introduction sessions during the past couple of months, over 30 ladies attended our inaugural meeting, many of whom signed up to become founder members.

WI Federation advisors Mrs. June Smith MBE (far left) and Anona Morgan (far right) attended to give their support and encouragement and are pictured either side of our elected Committee members

IN JUNE Charity campaigner Dame Claire Bertschinger gave an inspirational talk to Bishop’s Stortford about her life helping people in poverty-stricken and war-torn countries. The former Red Cross nurse made her first big impression on the world when she spoke to the BBC from the front line during the 1984 Ethiopian famine. The report inspired Bob Geldof and Midge Ure to launch the 1985 Live Aid campaign.
Claire converted to Nicheren Buddhism after realising there were no winners in war. With her two followers she chanted the Lotus Sutra and explained that the chanting was more than just trying to force a change in the way one thinks, it was a method of developing your inner spirit. A questions and answers forum followed.
JULY ~ A fascinating journey for Bishop’s Stortford in July, as retired London Cabbie Mike Stiffell, explained The Knowledge  where thousands of streets and landmarks within a 20 mile radius of Charing Cross have to be recalled. With 40 years experience there were plenty of amusing tales of passengers including Royalty and Celebrities.

Our First Garden Party at the home of Jemma Golds in Hadham Hall included some very special guests.
We were delighted to welcome Baroness Shirley Williams ,who gave a fascinating insight into her life in the House of Lords. whilst enjoying tea and cakes in a very relaxed and informal atmoshpere other guests included  June Smith MBE and Joyce Spackman - Photos are in our Photo Gallery

AUGUST brought a  buzz in the air at Bishop's Stortford WI when Patricia O'Connor
gave a fascinating insight  into bee-keeping.
Our Competition for a limerick or poem about a bee was won by Helen Ranger
LAMENT OF A WORKER BEE
An uppity young female bee
Complained 'Be a worker?..Why me?
Those drones are so lazy - While I toil like crazy
Just because I'm a She not a He


SEPTEMBER We were entertained by Sheila Parker with her stories of life as a Tiller Girl followed by a career with the Vernon Girls. Such an interesting and colourful life bringing back lots of memories of those rock ‘n’ roll years.
Our competition for Household Hints gave members lots of tips and the  preserve & produce sales table was well supported.

OCTOBER  We welcomed Ursula McNair who was born in Germany a few months before the start of the second World War. We were all captivated by Ursula's moving story as she told us how her hometown had been destroyed and the family, a brother, sister, mother and aunt were evacuated to the East only to find that one morning the villagers had fled leaving the refugees behind.

In order to avoid capture from the occupying Russian troops the family started an epic journey of nearly 9 months before they  finally reached the border close to their hometown where US troops took care of them.

A truly inspiring story and we thank Ursula for sharing it with us.
Our competition was for a Wartime Memento - several interesting pieces of memorabilia were on display including a beautiful collection of embroidered cards which won 1st place - members judged the exhibits by placing coins onto their favourite item - the proceeds going towards donations to ACWW

NOVEMBER  - Our first Annual Meeting with Hertfordshire WI Advisor Mrs. June Smith MBE. The exisiting committee was re-elected along with  2 new members. Everyone is looking forward to the programme and events planned for 2012

Our 1st QUIZ NIGHT WITH FISH SUPPER was held on 10th November with a sell out of 120 quizzers (17 tables of between 6 & 8). Neighbouring WI members supported the event along with family & friends of our own Institute. Local business also supported the event with donations of raffle prizes from Coopers of Stortford ~ Millers Salon & Fishy Biz other donated prizes were a Ski Lesson with  an ex British Coach and a Garden Voucher that would be put to good use when Spring arrives. 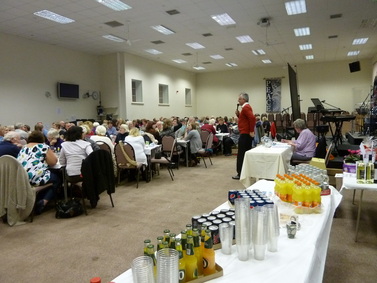 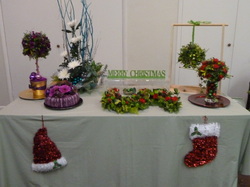